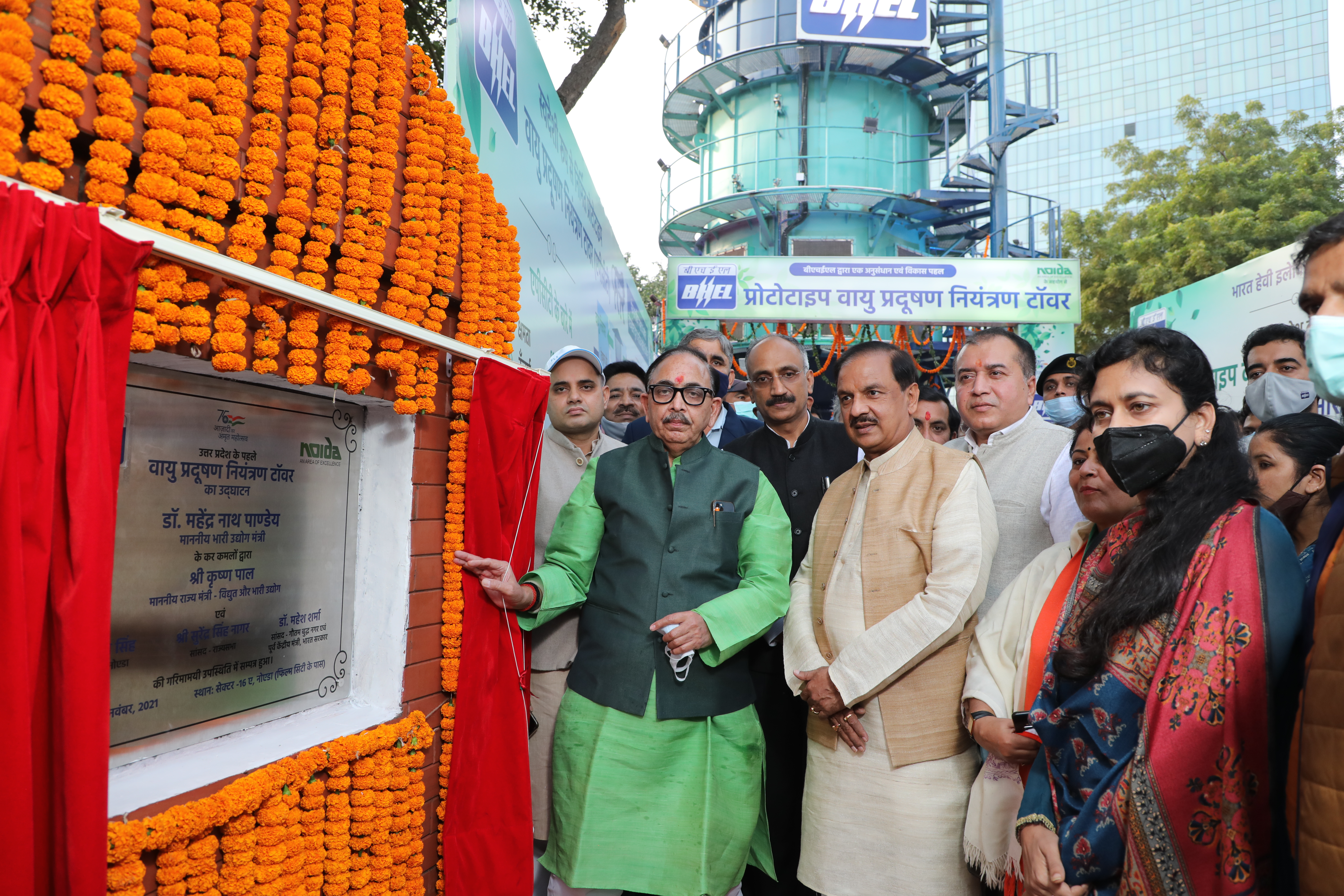 New Delhi, November 17: To deal with the problem of rising air pollution in urban areas, Bharat Heavy Electricals Limited (BHEL) has indigenously designed and developed a prototype Air Pollution Control Tower (APCT). This APCT has been installed in Noida on a pilot basis by BHEL in association with the Noida Administration. With this initiative, BHEL is working hand in hand with the Noida Authority in the fight against pollution in this area for improving the health of local residents, office-goers and visitors.

The APCT was inaugurated by Dr. Mahendra Nath Pandey, Hon’ble Union Minister of Heavy Industries in Noida in the presence of Dr. Mahesh Sharma, MP, Lok Sabha and Sh. Pankaj Singh, MLA, Noida. Dr. Nalin Shinghal, Chairman & Managing Director, BHEL, Ms. Ritu Maheshwari, CEO, NOIDA, Directors on the Board of BHEL, and other senior officials of the Ministry of Heavy Industries, Noida Administration, and BHEL were also present on the occasion.

Addressing the gathering, the hon'ble minister said that it is a matter of pride that BHEL along with Noida Administration has taken this initiative at the local level to combat air pollution. Air pollution can be tackled by such active collaboration between industry and administration. This is the need of the hour.

Dr. Pandey said that this APCT is completely indigenous which will contribute to the success of the ‘Make in India’ campaign of our Hon'ble Prime Minister. I am told that the cost of development of this product is low which is a good thing. I am sure BHEL engineers will further improve this product and reduce its cost, so that wherever there is a problem of air pollution, many such towers can be installed.

The National Capital Region is plagued with the problem of air pollution especially in winter months, with the Air Quality Index deteriorating to hazardous levels, which is a matter of serious concern for the health of the local population.

Designed and developed by BHEL’s Corporate R&D Division, manufactured at its HEEP Haridwar plant, and installed by Power Sector [NR] Noida, the APCT operates by pulling polluted air through its base and capturing the particulate matter in filters installed in the tower. Clean air is then released from the top of the tower. The captured particulate matter gets collected in the hopper at the bottom of the APCT for periodic removal for disposal. BHEL’s Pollution Control Research Institute, Haridwar will carry out the performance study of the APCT for one year.

The tower has been set up on the traffic island between the DND Flyway and the slip road to Noida Expressway as pollution is high in this area due to high volume of traffic on the DND and the Noida Expressway.

NOIDA Authority has provided land for the tower and is bearing 50% of the running expenses. All other developmental and capital costs pertaining to design, manufacturing, installation and commissioning and balance running expenses are borne by BHEL.

Based on the success of this project, a grid of such APCTs can be installed in NCR to improve the ambient air quality of the city.